Stream voice, data and video via an “infrastructureless” network

Infrastructure-based systems that use as cellular or WiFi technology utilize a central ‘hub’ node to deliver high speed connectivity and good Quality of Service (QoS) to the user. Removing this infrastructure and adding mobility, coupled with time varying connectivity profile without adversely affecting the user’s QoS is the formidable challenge faced by developers of Wireless Mesh Networking (also called MANET, or Mobile Ad hoc Networking) systems.

A MANET system is a group of mobile (or temporarily stationary) devices which need to provide the ability to stream voice, data, and video between arbitrary pairs of devices utilizing the others as relays to avoid the need for infrastructure.

There are many techniques which are employed in order to provide robust MANET capability, including the following:

Self-Forming / Self-Healing is a crucial characteristic of MANET systems. In a true mesh network, radios can join or leave the network at any time, and the network will continuously adapt its topology as nodes move in relation to one another. This implies a decentralized architecture in that there are no central “master” hub radios required to administer control of the network, and communications will continue to persist even when one or more nodes are lost.

Link Adaptation is the ability for each radio to optimally configure its transmission parameters (constellation, FEC coding, and MIMO techniques) to maximize the data rate and robustness of the links to each of the other radios it is communicating with. A particular radio may communicate with another close by radio using a data rate of over 50 Mbps, while using a rate of only 2 Mbps to provide a robust link to a radio much further away. These are packet burst rates, where using a 50Mbps burst is very useful even for a much lower rate data stream because it leaves free channel airtime for other nodes in the network to use. Having high potential data burst rates is important because the less airtime is consumed for the shorter links, the more airtime is left to use slower and much more robust modulation and coding on the distant links.

Adaptive Routing is a mechanism for determining which potential relay paths are used when a stream of data needs to be sent between a given pair of radios. It needs to support self-forming self-healing functionality by adapting dynamically to use all radios present as potential relays and be resilient to the loss of relaying radios. It must also work in conjunction with the link adaptation because determining the optimal route for a stream of data requires consideration of other data which is flowing through the network, as well as the dynamic capacity of each link within the network. This problem is complex and requires all radios to share information about the data traffic flowing through them and the link capacity from each to the other neighboring nodes. This sharing of information must be done in an intelligent manner so that it does not consume too much of the precious available network throughput.

Transparent IP Networking means that any number of standard computer, IP video camera or other devices may be connected to each of the mobile radios and communicate through the mesh network just as if all of the devices were in a single office with wired Ethernet. There are different ways this can be accomplished within the MANET. To enable the most flexibility and ease of use, the best choice is to have the entire MANET network appear as if it is a single Layer 2 networking switch. This means that without any reconfiguration of IP addresses or other settings, a group of IP based devices that work together on a simple Ethernet switch can be connected to MANET radios and resume operations with the new freedom of wireless mobility.

Multicast Traffic presents a set of unique challenges for MANET systems. The multicast support implemented in basic wired Layer 2 switches is to replicate multicast packets coming into one port on all of the other ports. For instance, if an IP video camera is connected to one port it would send its video using packets tagged as multicast. Then computers wired to any of the other ports of the switch can tap into the wireless video stream. This simplistic method turns out to not work very well in a wireless network acting as a Layer 2 switch because many devices within the network might not need to see a particular multicast, and blindly sending the multicast to all devices thus congests the limited throughput of the wireless network unnecessarily. More advanced MANET systems allow manual and/or automatic optimization, limiting the transmission of multicast to only those devices that need a particular multicast stream.

Multi-channel Networks is an advanced capability of some MANET systems which allows a network to utilize multiple RF channels or even multiple frequency bands within a network while still providing the plug and play functionality of a single Layer 2 switch. A simple example of the usefulness of this might be a scenario where soldiers have radios operating on one frequency while vehicles have radios not only operating on that frequency but also ones in a different band. This additional band might be with higher power or higher gain antennas to provide a high speed “backbone” layer between the vehicles. Any soldier’s radio device can communicate with any other soldier’s radio over the air, but the secondary layer on a different frequency can reduce congestion on the soldier frequency and increase to area covered by the network.

All of these MANET networking capabilities combine to provide robust high speed connectivity similar to what is offered by state of the art 3G/4G networking, but in mission critical operational scenarios where permanent wireless infrastructure is not available.
BACK TO TOP 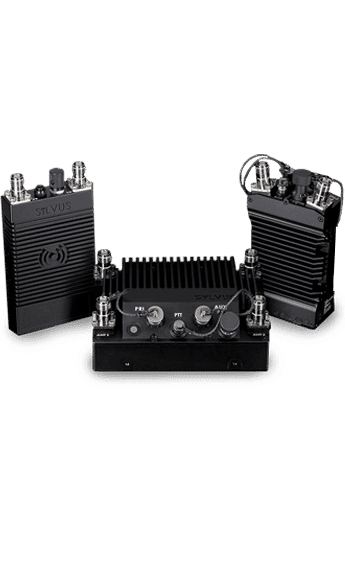